On the opening stage Guy’s Fiesta R5+ managed to open a three second lead over Kirkaldy, despite a big lock-up. “I had too much bias and locked up at the first corner,” he explained. In third Peter Smith/John Millington’s Fiesta WRC was another eight seconds back, while both John Cope/Simon Hunter’s Impreza WRC and Graham Coffey/Jon Atherton (Fiesta WRC) struggled for grip in the damp conditions and were only one second apart in fourth and fifth, with Dave Welch/Steve McNulty (Impreza) completing the initial top six.
With Guy increasing his lead to seven seconds, Peter was into second after SS2 with Kirkaldy losing out with a worsening misfire. Coffey also edged clear of Cope into fourth, while Josh & Tamsyn Davey’s Darrian T90 consolidated seventh over the Impreza of Martin Pavier/Peter Kettle.

Davey had managed to reel in Welch and after the third stage was joint sixth, as the top five all held station. However, it was all over for Kirkaldy after four stages when he was forced to head to the finish early with a broken diff. “We had cured the misfire and then this happened,” he said. (this was his 3rd retirement on this event in 3 years). Also in trouble was Davey, a broken driveshaft added to a recurring misfire brought them in early too.

So, after four stages Guy was 17 secs clear of Peter. “I am really enjoying it and it was the first time I had ever been on the old Melbourne loop,” said Guy. “I am trying to beat him,” Peter replied. Coffey was a further 40 secs back but now third, with Cope fourth, Welch fifth and Robin Adams/Ray Keith (Escort Mk2) in sixth.
After the leaders had all consolidated their places on stage five, Guy suddenly lost time on stage six to both Peter and Coffey. “I know it was uphill but it had felt down on power on stage five and it worsened,” he explained. “I had guessed that Guy had maybe a turbo pipe off, so I did try hard,” Peter replied after reducing the gap to nine seconds.
The response was swift and Guy completed the victory by adding another eight seconds to his winning margin, while Peter had 54 secs in hand over third placed Coffey. Cope, Welch and Adams completed the top six, with Martin Stockdale/Nick Taylor (BMW 1M) in seventh from stage four and Richard Poole/Ben Pritchard’s BMW eighth, after ousting Ray Read/Stuart Anderson-Peters’ Audi Quattro. Read retained ninth with Pavier completing the top ten.

Jon Hudson/Adi Collins’ Suzuki Swift dominated class 1. They led from start to finish for a 37 second victory over Mark Annison/Ian Humphrey’s Ford Puma. Matt/Adrian Walk (Fiesta) were second initially, before losing out to Annison on stage two and Dale & Andrew Lawson’s MG ZR on the next stage to settle in fourth.
Class 2 belonged to Andrew Turner/Richard Winstanley’s Honda Civic all day, as well as running in the top 10 overall for a while. They took the class by over two minutes from Chris Ruck/Steve Harris’ Corsa. Mark Burton/Zoe Wright (Fiesta XR2) lost their hold on third early on but managed to claim it back from Ashleigh Morris/Jamie McTavish’s Fiesta during the afternoon.

Once Davey’s Darian had hit trouble on SS4, class 3 belonged to Robin Adams’ Escort. Despite bedding in a new engine Mike English/Andy Robinson (Escort Mk2) were second, while the Escort Mk2’s of John Stevens/Samantha Bartlett finished level with Mick & Ben Jowers but had the verdict as Jowers picked up a time penalty on the opening stage. Following Kirkaldy’s departure it was an all BMW podium in class 4, with Stockdale heading Poole and Roger Titley/Chris Ransley, with Nick Beddoes/Jamie Vaughan’s Escort fourth.

And what of the Dukeries Crews? Well Dave Welch, who has in the past said he is not fond of circuit events, put on an exceptional display to come 5th overall and first of the non-WR inspired cars. The result of the intense Team Cruddle battle was reversed from the Flying Fortress Stages, with this time John Stevens / Samantha Bartlett finishing 16th overall and ahead of Craig Stevens / Don Bramfoot in a similar Mk2 Escort. 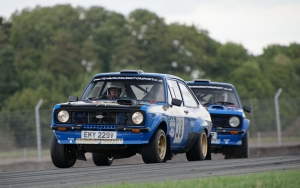 John Godbehere / Michael Ball (Subaru Impreza) 20th overall included a couple of spins whilst Andy Wright/ Nigel Powell (Honda Civic) had a consistent run to finish 25th.  Cliff Richards this time accompanied by Geoff Moss (Escort Mk2) was pleased to finish 34th whilst Ian & John Dove (Nova) had some gearbox issues but finally got to the finish of an event and were rewarded with 6th in class 2 and 41st overall. Ian Bass/ Cameron Young in the mighty 998cc Yaris finished 47th overall just ahead of Blake Morris and Simon Ashton in the KA.

It was a busy weekend for Paul Rees / Paul Briggs (Astra Mk2) who were leading both the EMAMC and Dukeries MC Championships. They spent most of Saturday helping to set up the stages but come Sunday the event proved to be a huge frustration. The first stage resulted in a ‘maximum’ when the drive shaft / CV came out. They managed to get back to the Service Area but missed SS2 whilst fixing the problem. The issue re-occurred on stage 3 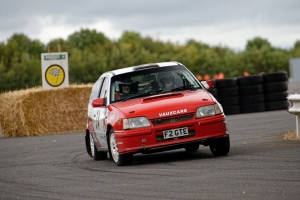 resulting in another maximum time. Further modifications seemed to fix the problem and stage 4 was completed without a hitch, only for the problem to re-occur on stage 5. After that it was damage limitation with the aim of getting to the finish without breaking the car, which they did, but with the collection of maximum times leaving them 61st overall. After this character-building experience, they then spent a further 2 hours using their trailer to collect up equipment from around the circuit.

Amongst the non-finishers were Simon Belcher/ Pete Butler (BMW) who retired on stage 4 when the “crappy ford engine” blew up! John Griffiths/ Nigel Wetton (Subaru Impreza) suffered from a misfire that was proving difficult to trace and when Nigel became very sick on stage 4 they decided to call it a day. Sam Bennett / David Simmons (Renault Clio) suffered gearbox issues from stage 3 and David May / Mark Swallow in the immaculate BMW M1 also retired with gearbox problems after stage 5.

Grateful thanks to the event organisers and all the officials and marshals especially the stage set up teams who were working Friday, Saturday and after the event on Sunday evening to ensure that the 59th Dukeries Rally was an enjoyable and competitive event. Their efforts were greatly appreciated by all the competitors.