The History of the Dukeries Rally

1960 was the first Dukeries Rally with a ‘restricted’ RAC permit, although there had been a ‘closed to club’ event with this title the previous year. The event ran on October 16th 1960 as a night road rally using the local roads in Nottinghamshire and had an entry fee of £0-15s-0d (75p). It was immediately observed as a potential round of the fledgling East Midlands Association of Motor Clubs Rally Championship which it entered in 1961. 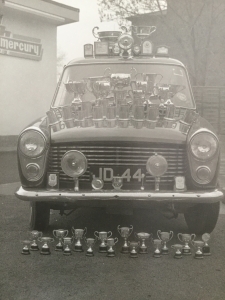 <  The Austin A40 used by the 1st Dukeries Rally winners in 1960, John Davis / Colin Adkin with all the trophies they won.

Jim Porter’s recollections of these early events were of “tricky navigation with 50 car entries using Ford Anglias and 850 Minis trying to find the correct route amongst the maze of ‘not as map’ roads and tracks within Clumber Park”. In an effort to find more competitive rally territory the event moved into Derbyshire during the mid-1960’s and by 1967 the organisers added special stages to an already tough event. By 1969 the reputation of the event for good organisation had attracted the BTRDA Silver Star Championship and in 1970 the event was upgraded to ‘National’ and was a qualifying round of the Motoring News Castrol National Championship and the BTRDA Gold Star Championship.

A typical rally itinerary of this period taken from the 1970 event was:-

Early evening start from Trent Bridge Cricket Ground in West Bridgford, Nottingham, 5 stages south of Nottingham including Donington Park (before the race circuit was rebuilt) and the road around Blackbrook Reservoir.  A fuel halt at Hulland, followed by 6 selectives in Derbyshire / Staffordshire. After the first leg, the leader was Brian Bell (yes the same Brian Bell who won the event 22 years later) who also set fastest time on the first selective before retiring with a broken half shaft.  Another fuel halt at Buxton followed by 5 more selectives in Derbyshire. Fuel in Matlock at dawn and then 6 forest stages in Felley, Annersley, Harlow, Strawberry Hill and Clipstone and further stages at Lamb Pens, MOD land at Bilhaugh and finally 3 laps of Scofton Airfield.  The finish was at The Old Bell, Barnby Moor for a late breakfast and awards. The total distance was just over 400 miles and in that year the event was won by Chris Benyon and Lyn Andrews in a Ford Escort Twin Cam.

By 1971 the event had moved to an all stage format and for a few years the event was also part of the Autosport RAC Rally Championship of Great Britain. (Entry fee £10.)  However to obtain the required 80+ stage miles the event had to make use of some disused airfields and farm roads on the Nottinghamshire / Lincolnshire border to supplement the forestry stages in Sherwood Forest. This brings back memories of Roger Clark, Chris Sclater and Tony Drummond drifting their Ford Escorts around 3 laps of Scofton airfield…!  (see photo)  This was the era dominated by Roger Clark and Jim Porter in the Esso Uniflow Escort (LVX 941J), followed in 1974 by Tony Drummond & Dave Richards.  (The same Dave Richards who is now Chairman of Motorsport UK).

The organisation of the Dukeries Rally during the 1970’s involved many things that would now be considered way beyond a rally organisers remit.  Typed minutes from the 1974 organiser’s meetings [Secretary of the Meeting Iris Kellett] included items such as confirmation of a change in government subsidies on the cost of cheese and the effect this would have on the menu for the competitors post event meal which was included in the entry fee. A team of ladies from Dukeries MC used to prepare 300+ meals for the end of the event and also provided bacon or sausage rolls for competitors from the club caravan between stages in the forest !

1976 saw radical changes when the event was rescheduled in March (only 5 months after the 1975 event) and started at midnight on Saturday from the new Idlewells Centre in Sutton in Ashfield, with half of the stages run in the dark before a lunchtime finish back at the Idlwells Centre.  Although this night time format had many advantages and provided competitors with an extra challenge, there were a number of significant drawbacks and by 1978 the event had returned to the more usual Saturday daylight format. 1979 was another notable year when in addition to the BTRDA and East Midlands Championships the event was a round of the Ford Escort 1300 Championship and the Fabergé Fiesta Ladies Challenge.  Some 270+ entries were received for the 130 starting places.

During the late 1970’s and early 80’s the event gradually became more compact and used fewer non forest stages.  This process was helped by two organisational successes;  (i) obtaining use of a 5 mile stage in the Birklands, (part of which is a SSSI…! ) known as ‘Portland’ in recognition of the freehold owner Portland Estate, and (ii) the use of the mixed surface roads in Clumber Park, owned and managed by the National Trust.  This was the format use for the Dukeries Silver Jubilee Rally in 1984. (Entry fee £83.)

From 1987 to 2006 the event was based at the Mansfield Civic Centre for the Start, Finish and Rally HQ and used 45 miles of special stages in Sherwood Forest.

The 2001 Dukeries Rally was the first forest stage rally to run in the UK after the Foot and Mouth epidemic had stopped all rallying for 4 months.  The event attracted a full entry in just 5 days and was won by the then National Champions Marcus Dodd / John Binnie in a Subaru Impreza.  Until 2002 only one crew had won the Dukeries Rally three times; Roger Clark and Jim Porter in 1962, 1972 & 1973. The Clark family have scored 5 victories in total with Roger’s sons Matthew in 1993 and Oliver in 1997 following in the family tradition. However 2002 saw long time Dukeries club 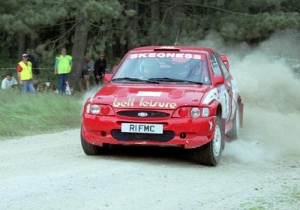 member Brian Bell equalling the Roger Clark record of three wins (1992, 1999 and 2002). Brian is also surely the driver who has competed on the greatest number of Dukeries Rallies, approximately 28, between 1966 and 2005, plus 2015. 2003 saw another team of hat-trick winners with Andy Burton / Rob Morgan this time in the fearsome Peugeot Cosworth winning the event for the third time on their way to becoming the 2003 BTRDA Gold Star Champions. Again in 2004 the event winners Graham Middleton / John Morgan (Hyundai Accent WRC) went on to win the converted BTRDA Gold Star Championship. Graham and John came back in 2005 and repeated their Dukeries Rally victory.

In 2006 it was local businessman Steve Perez with Scott Martin in the VK Ford Focus WRC that won the event that Steve had first competed in as a co-driver with Alistair Sutherland back in 1983.

The 2007 event will be remembered for the thunderstorms of biblical proportions which flooded out the new Rally HQ at Southwell Racecourse and forced the cancellation of the Rainbow Hill stage. However the event organisers overcame these challenges to run the event which was won by Will Nicholls / Nick Broom in a Subaru Impreza.

The 2008 Dukeries Rally was dominated by the Weston family from Aberdeen. Father Dave Weston won the event accompanied by experienced co-driver Dave Robson whilst 17 year old Dave Weston Jnr (future BTRDA Gold Star Champion) won the GpN class and was the highest placed driver not in a World Rally Car.

For the Golden Jubilee event in 2009 the club made great efforts to mark 50 consecutive years of the Dukeries Rally and were rewarded with a full 150 car entry.  Steve Perez accompanied by Sam 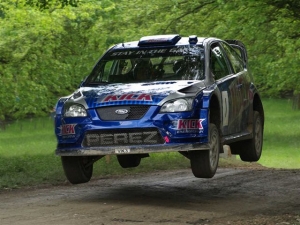 Collis proved ‘just too good’ on a day when many of the leading BTRDA crews fell by the wayside.  Steve Perez completed his hat-trick in 2010, this time accompanied by Paul Spooner who also notched up his third win as a co-driver.  Sadly the event was overshadowed by the fatal injury to Martyn Lewis, the driver of car 204. 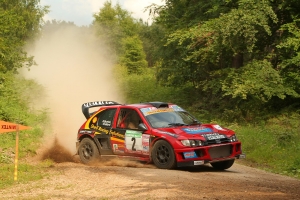 In 2011 it was Andy Burton who became the first driver to have won the event four times, again in the Peugeot Cosworth, on the way to clinching another BTRDA Gold Star title, whilst in 2012 it was Hugh Hunter and Andy Marchbank who restored the trend of Ford Focus WRC wins. In 2013 Charlie Payne continued the Ford dominance of the rally and was partnered by now the most successful co-driver in the event history Paul Spooner who joined the list of four times winners of the Dukeries Rally.

2014 was to be the last Dukeries Rally to take place in the Nottinghamshire forests when it became clear that it was no longer viable to run such a fiercely competitive event in these easily accessible forests.  It was fitting that the final Dukeries Forest Rally was again won by Steve Perez & Paul Spooner (Ford Focus WRC) who went on to become the BTRDA Champions that year.

2015 saw the start of a new era for the Dukeries Rally when it returned to Donington Park which it last visited in 1970.  The event was won by Ashley Field & Ryan Vickers in his new Darrian T90 GTR+   Ashley repeated this success again in 2016 accompanied by Steve McNulty.  Graeme Bell & Russ Radford (Proton Satria) won by just 2 seconds in 2017 whilst in 2018 it was a family affair with Guy Smith (Son) & Patrick Walsh (Ford Fiesta R5+) winning the event just ahead of Peter Smith (Father) & John Millington.

Since 1969 the Dukeries Rally has always been fortunate to have a main event sponsor.

The organisation of any motorsport event requires many people and is very much a team effort, but the key official is the Clerk of the Course. Over the years the Dukeries has been fortunate to have had some dedicated Clerks of the Course including Jim Adams, John Maskery, Robert Bealby, Gordon Kellett, John Taylor, Bill Hopewell, Steve Mugglestone, Dave Clibbery, Ray Downs, Howard Wilcock, Edgar Allen and especially Rod Clarke (1982 – 1993) and Bob Draper from 1994 to the present day. (26 years and counting..! )